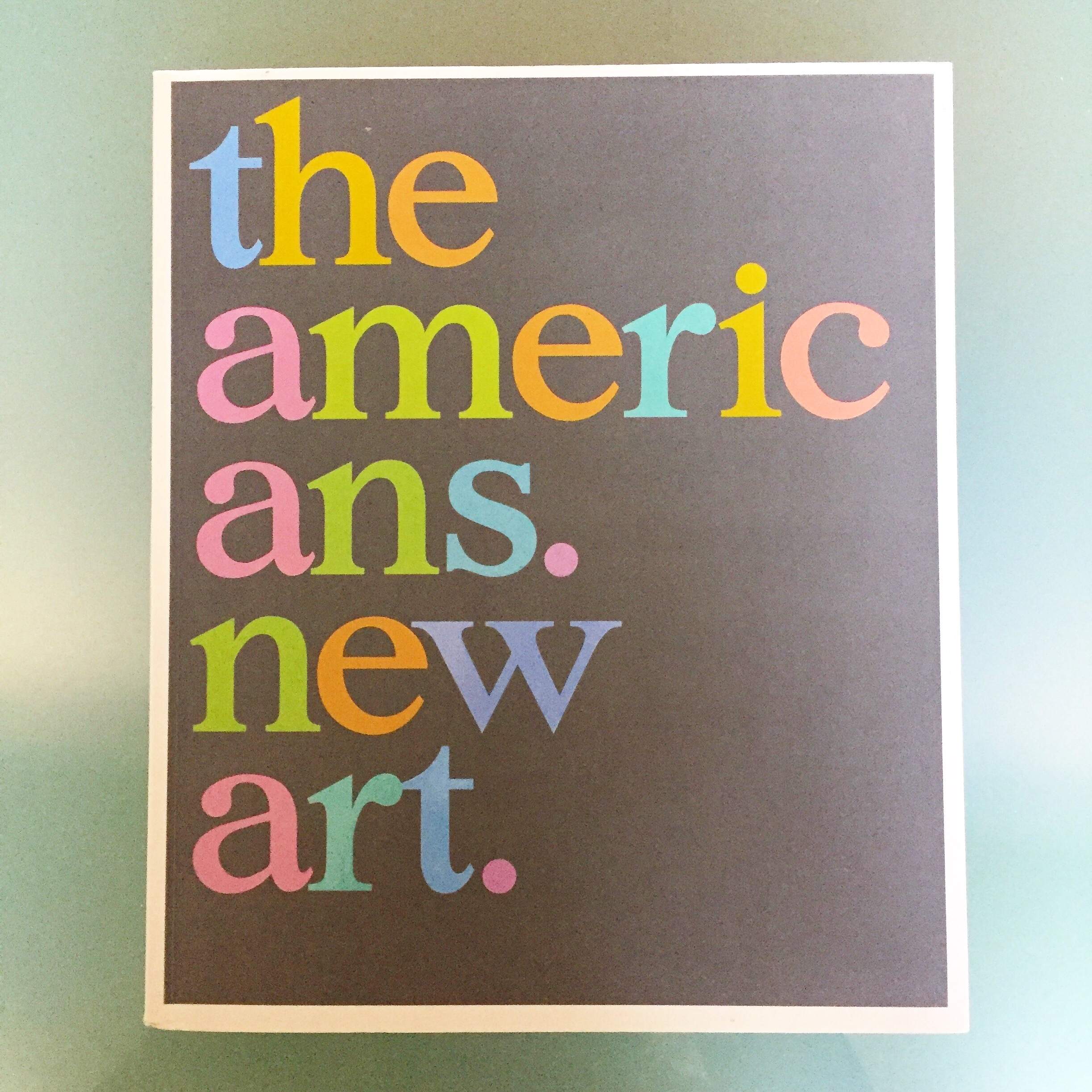 I started the day seeing an exhibition called, 'The New Americans.' I wondered if this was a poor relation to the UK's YBAs (Young British Artists) signature exhibition 'Sensation' being a little late and past it. Maybe it's a little unfair to compare the two as there were a few interesting works.

Perhaps the closest works that trigger similarities between this 'New Art' and the YBA's can be seen in Tony Matelli's realistic sculptures. Matelli's sculptures are allegorical depictions of people and things that are found, lost within a turbulant world striving to survive. 'Lost and Sick: Winter version', shows a drunken pubescent trio puking up their guts, out in the snow. 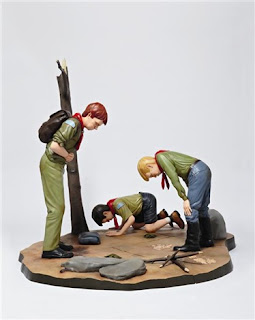 In contrast Keith Edmier's 'Victoria Regina', Beverly Edmier,  a life sized figure of the artist's mother made in opalescent pink resin. She wears a Chanel suit in a lighter shade of pink, she looks lovingly down into her transparent room to her growing embryo, the artist inside her tummy. 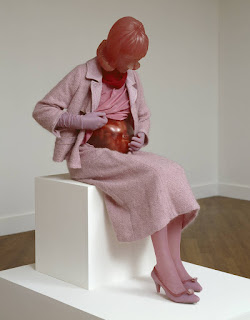 Fred Tomaselli creates an interesting technique with his use of collage. He uses found images, bugs, flowers, medicinal herbs, hallucinogenic plants and medicinal pills. He chooses titles such as: 'Bug Blast', 'Gravity's Rainbow', and 'Untitled Expulsion'. Together these images work as pure eye candy stimulating the mind, desiring to take it to another place. You are never quite sure what you are seeing, as the image plays on your visual senses, hallucinating and merging into a larger pattern within a swirling kaleidoscope. The final result becomes luscious and inviting the cut out images become almost suspended within the encased multiple layers of glossy resin. 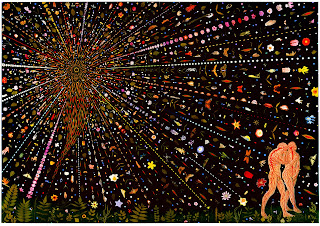 The Japanese do it better

The Haywood was showing 'Facts of Life', an exhibition of Japanese art. 'Facts of Life', does not try to define what is considered to be 'Japanese', instead it seeks out the most interesting art that is being made in Japan today.

The first artwork that drew me in was the hypnotic spectrum of colours that make Shigenobu  Yoshida's video, 'Bordeaux', the artist is preoccupied with light and is particularly interested to communicate the ordinary miracle of the rainbow. With the help of volunteers he demonstrates how to make them, using water and mirrors as a method of projecting the sunlight. In 'Bordeaux', a video of the view taken out of the train window while holding a prism over the lens. The result captures the moving contours and shapes of the passing urban landscape as the trees buildings and other features are split into multicoloured bands of colour. 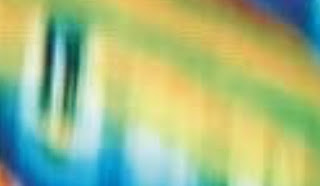 Close by, hovering in the heavy air space of the gallery is Takefumi Ichikawa's 'Fuju'. A piece that consists of large transparent tubular shapes filled with helium, which floats about the large gallery space like ghosts of sculpture. Much of its identity is derived from the environment as it communicated between surrounding works, moving fast and slow, high and low, subjecting itself to the flow of air that picks it up or pushes it down, surrounding us, as you literally see through it. 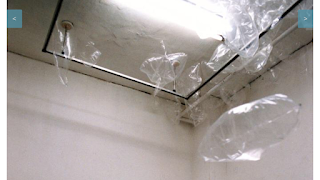 The artist Yayoi Kusama is a well known figure within the Japanese art scene, spanning back from the mid sixties. Now in 2000, she has made a film of the 'Song of a Manhattan Suicide Addict', which shows the artist seeming to turn mad as she emotionally sings, due to her overwhelming agony of flowers. She becomes troubled by the foreseeable demise of the floral phenomena that accentuates the intensity of her song becoming quite erratic. In contrast her other instillation, 'Narcissus Garden', is calming and serine. It's created by numerous 17 inch silver balls that spread across the gallery floor. Somehow I feel the desire to dive into the instillation, to roll onto the mirrored balls that glisten reflections of all the angles of the room. But I don't, I just watch the repeat of change reflected in the silver as I, or others walk by. 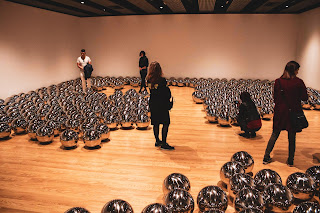 The White Cube in Hoxton Square was showing Sam Taylor Johnson' s 'Mute', a series of silent films, solitary photographs and sculpture. The art of film, sculpture and photography work together to expose the vulnerability and resilience of the human body and the mind's psyche when it is stretched to its limit. Her works are full of symbolic meaning as the relationship between the past can be seen in the Baroque and Renaissance religious imagery placed beside today's urban landscape. The most beautiful, emotional images are: 'Bound Ram', showing the helplessness of the young bound lamb and 'Self Portrait as a Tree', which seems like a usual view of the countryside until a moment within the cloud  breaks, allowing a slightly odd looking tree to become momentarily highlighted within a glow of a sun beam. 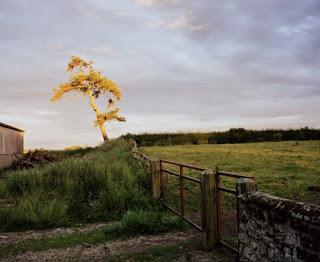 Self Portrait as a Tree : Sam Taylor Johnson

The film, 'Still Life', appears almost as a Cezanne painting fit onto a liquid display unit. At a closer look the beautiful colours of the lush fresh fruit gradually change, slowly revealing decay. As the fruit rots it folds in on itself, reducing itself to no more than a green sludge. The process of the sequences become speeded up, unraveling the imagery before your eyes. Echoing our life cycle, the life and death of the fruit shrivelled, as juicy and mouldy played on a continuous loop. 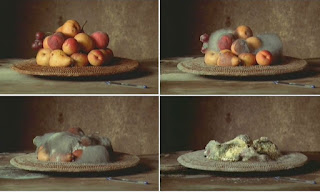 'Breach (Girl with Eunuch)' consists of two parts, as a film and a sculpture. The silent film shows a single shot taken in real time, showing a girl becoming increasingly upset and anxious although it remains unclear why, as the threatening presence remains unseen. Somehow the sculpture shows a sign of hope with a desire to escape.  A large scale, upper body of a unicorn seems to reach with all it's might to pull it's sinking back legs out of the gallery's concrete floor. 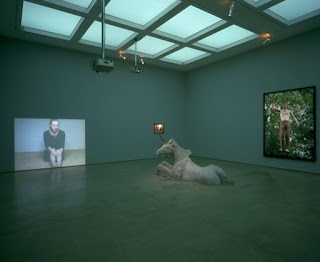