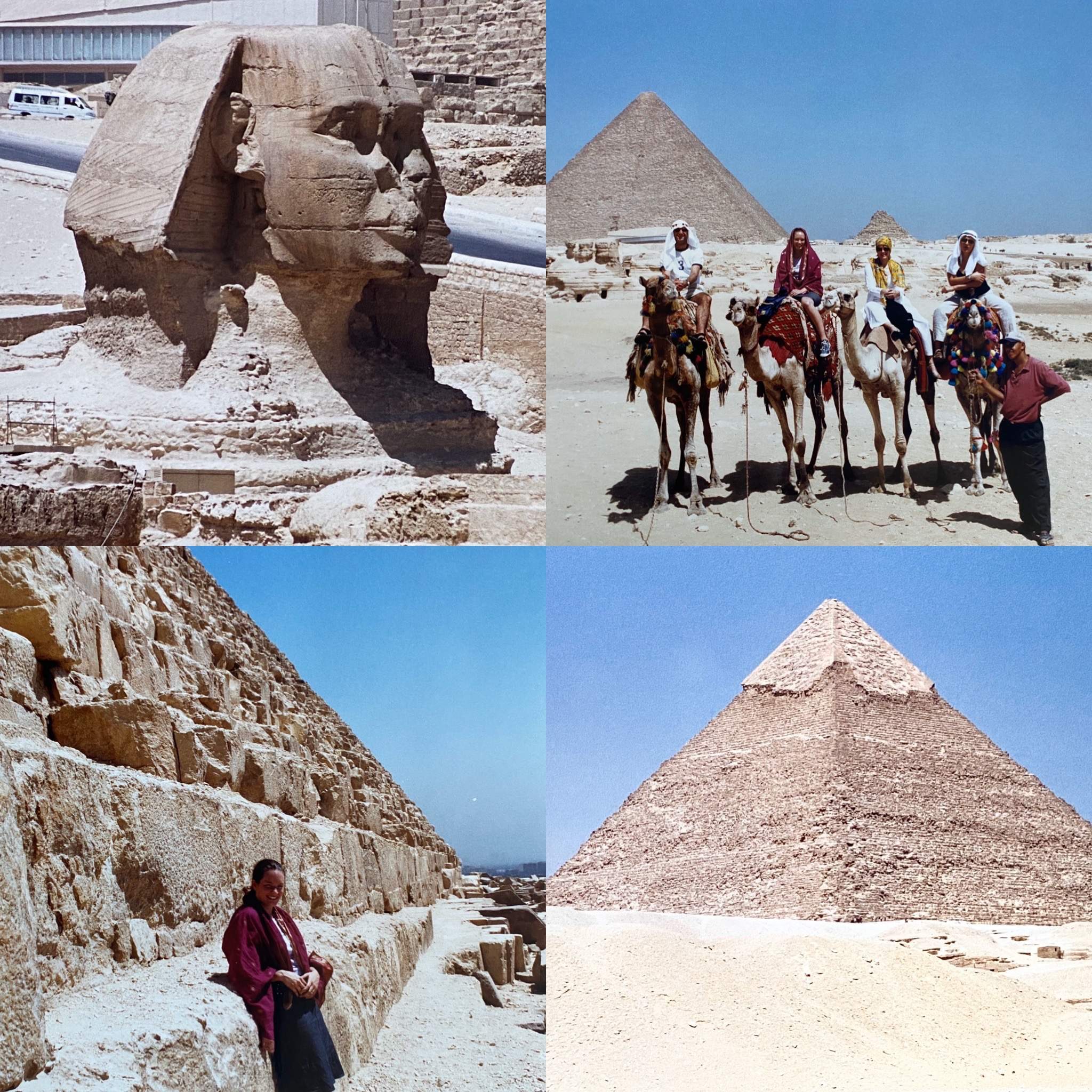 Living Amongst the Dead

At last I'm in Cairo, I'm excited as it means I get to seethe Pyramids. My earliest memories of art are of drawing hieroglyphics, making my own alphabets and designs. I was interested and  obsessed ancient Egyptian mythology, culture and afterlife, lured in by shiny gold. 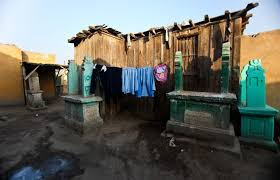 On the way to the Pyramids the majority of buildings appear to be in the process of construction, half built structures with steel supports jutting out of the ceiling with no roof or missing walls. Apparently, this is a scam in order to avoid tax, at least that's what I thought I could make out from the taxi driver's pigeon English. He also pointed out the Citadel, the old capital of Upper Egypt, where he tells us of an old cemetery where people have taken over from the dead. In the past tombs had mausoleum complexes built that were for entertaining. In the times of the Pharaohs, people came to enjoy picnics amongst the graves, often there was even enough space for sleeping over. Later these rooms became perfect places for squatters to take over. Today there are many people who have taken over the tombs, living amongst the dead as new generations become brought up this way. 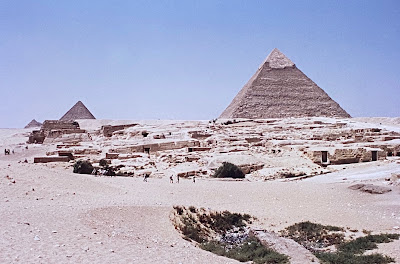 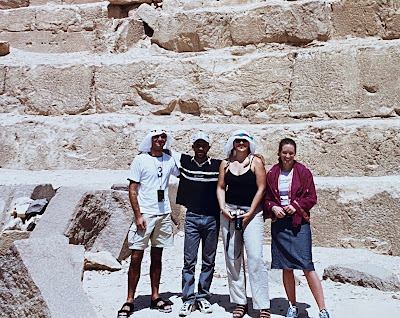 The Pyramids of Gaza

We get to the Pyramids and there are hoards of people bustling about their working day. Those with camels or donkeys try their upmost to tout for business, luring you in at each opportunity. In the end it gets too much, discontent with the business of bartering a group of five Egyptians verbally panic and shout at one another, as if they were claiming their rights on us. We became their prey following the pack taking the nearest group of camels. I felt sorry for these animals and it was obvious that they had seen better days, with their scabby skin and mass of flies in tow, I wondered if we would catch anything. I wasn't sure of how they were kept, although they looked a sight they were seemed  content, happy enough and it was so hot, too hot to be walking about so I followed the others. 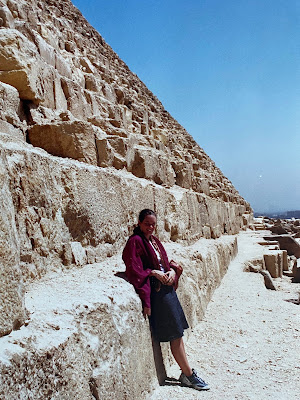 Once we had left the hustle and bustle of hawkers, it was calm and quiet. We had got there  pretty early and we were lucky to be the only people heading towards the great Pyramids. As I shutting my eyes and slowly opening them I could reach towards the spiritual possibilities and history that surround the Pyramid's existence. When they were built the exterior blocks were glistening with white limestone that reflected beams of light in all directions. It was only up to the 19th Century that the limestone was stolen to build the palaces and moss that you see in the city. The Pyramids are huge, and it seems impossible to get your head around how they were built, with such huge blocks, how were they even transported or lifted? And that's not getting as far as the network of paths and corridors connecting the inner chambers. There are many theories as to who built the Pyramids and why. The most traditional explanation being the ancient Egyptians built them as a means, assisting them to reach eternity, guided by their desire to be at one with the cosmos. It was thought that a Pharaoh was the Son of God, he was gifted to earth to lead and serve his people and then in his death he became immortalised as a god. The Pyramids, as well as serving as giant mausoleums for the deceased Pharaoh, are also visual reminders of the ancient Egyptian beliefs of the absolute and eternal powers of the Gods as they rule their land. While other conspiracy theories suggest they have been built by extraterrestrials. 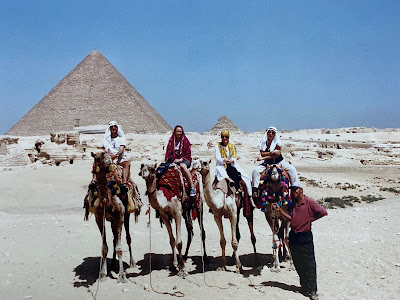 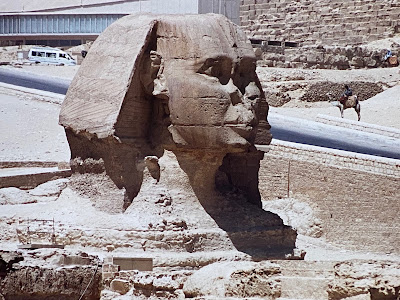 We asked our guides if it was possible to go inside, our response was a firm no! It is possible but it is not worth the effort as it is just a dark black smelly claustrophobic hole, where you can't see a thing. You probably can't see much but I guess the reality was they wanted to keep us as their meal ticket for the day. We enjoyed ourselves and it was spectacular to see the Pyramids and the Sphinx on camel back. At approximately 66 ft tall and 250 ft long I was most impressed that the whole body of the Sphinx has been carved out of one single mass of limestone. While being amazed at the sights we were seeing, as one of the seven wonders of the world, I couldn't help but feel a conned and disappointed. Our premonition was right. As we approached the place where we started the tour , our guide takes us into a slightly different direction and starts to demand more money, as we now needed to pay the other young boy who had tagged on half way and for the up keep and food for the camels, but on no account were we to report this incident to the camel owner. It's a shame that they were so desperate to con for money. Conveniently enough, when we arrived, our taxi driver was out for prayer, which lead to the next opportunity for a scam. They kindly offered apple tea and insisted we took shelter as it was the hottest time of the day. He took us to his friend's gallery selling cheap replica scrolls and 'nice' - tacky, 'ancient' souvenirs and asked us, insisted we buy something there. 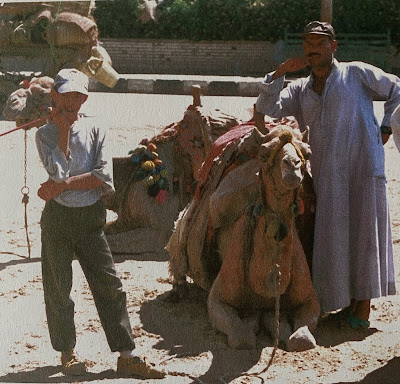 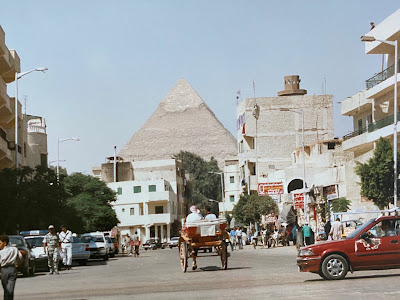 I was amazed at seeing some of the contents that had been taken out of the Pyramids and tombs. The sheer wealth and beauty in gold was breath taking and there were a vast number of mummies and statues scattered everywhere. With such an amazing amount of contents and it's wealth it seemed strange that the up keep of the place was so poor. There was thick dust everywhere and it was dark and dingy with little or no trace of identification.

There are scrolls of writing, pictures and murals in hieroglyphics, where the relief of people are all lined up on the same level with their feet placed side by side, horizontally, one in front of the other. There are ancient images representing the advances in technology and science, which is apparent in their use of astrology as they look up to the Gods. They believed in an after life and the tombs reveal script that illustrated the journey on  to the afterlife.  To help the dead Pharaohs on their voyage to immortality, offerings were given to the Gods, sacred animals, gifts they may need and gold were encased within the mummified king, in the tomb with him.

The most startiling and impressive belongings belong to the boy-king Tutankhamen. Although many of the pieces made in gold are seen globally in images, it can not compare to the real thing. This has to be the most beautiful art I have ever seen, breath taking, and also perhaps also for the vast amount of gold and the there value of it and weirdly placed in tattered dirt and darkness it seemed so surreal. The there volume of gold was astounding, from his headers, to the inner sarcophagi of his tomb, where there were jewels, statues and chariots. When you get past the vast gold, you are overwhelmed once again by the beautiful intricate carving, which illustrated the Pharaoh's journey to reaching immortality in the afterlife.

The strangest room, was dark and even dustier, full of mummies from the Graeco - Roman period. The room was full of encased specimens of mummies inside glass cases, lying flat, stacked high, one on top of the other. The mummies speed unusual due to the realistic portraits painted on top of their mummified faces, which I hadn't expected to see as it looked out of place. It seemed strange to see a style that was closer to romantic neoclassical painting of European art, a far cry from the simplistic ancient Egyptian figure and portraits we are accustomed to. 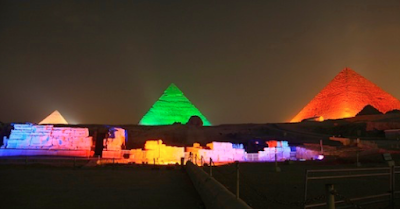 We ended the day returning to the Pyramids to watch The Pyramid Light and Sound Show where the Sphinx takes the role of narrator, telling us the story of the legacy of ancient Egypt. The light show is dramatic and spectacular accompanied by the voices of Richard Burton and Elizabeth Taylor, that echo, bouncing off the walls of the Pyramids. It's tacky and cheesy but charming, full of nostalgia. As I turn my head I can see the bright illuminations of the shops near by and the large bold signage of 'Pizza Hut' which feels disappointing, ruining the view. I'm almost surprised that it isn't Mc Donnald's golden arches. Sadly fast food gets prime location as profit wins against the cost of aesthetics.