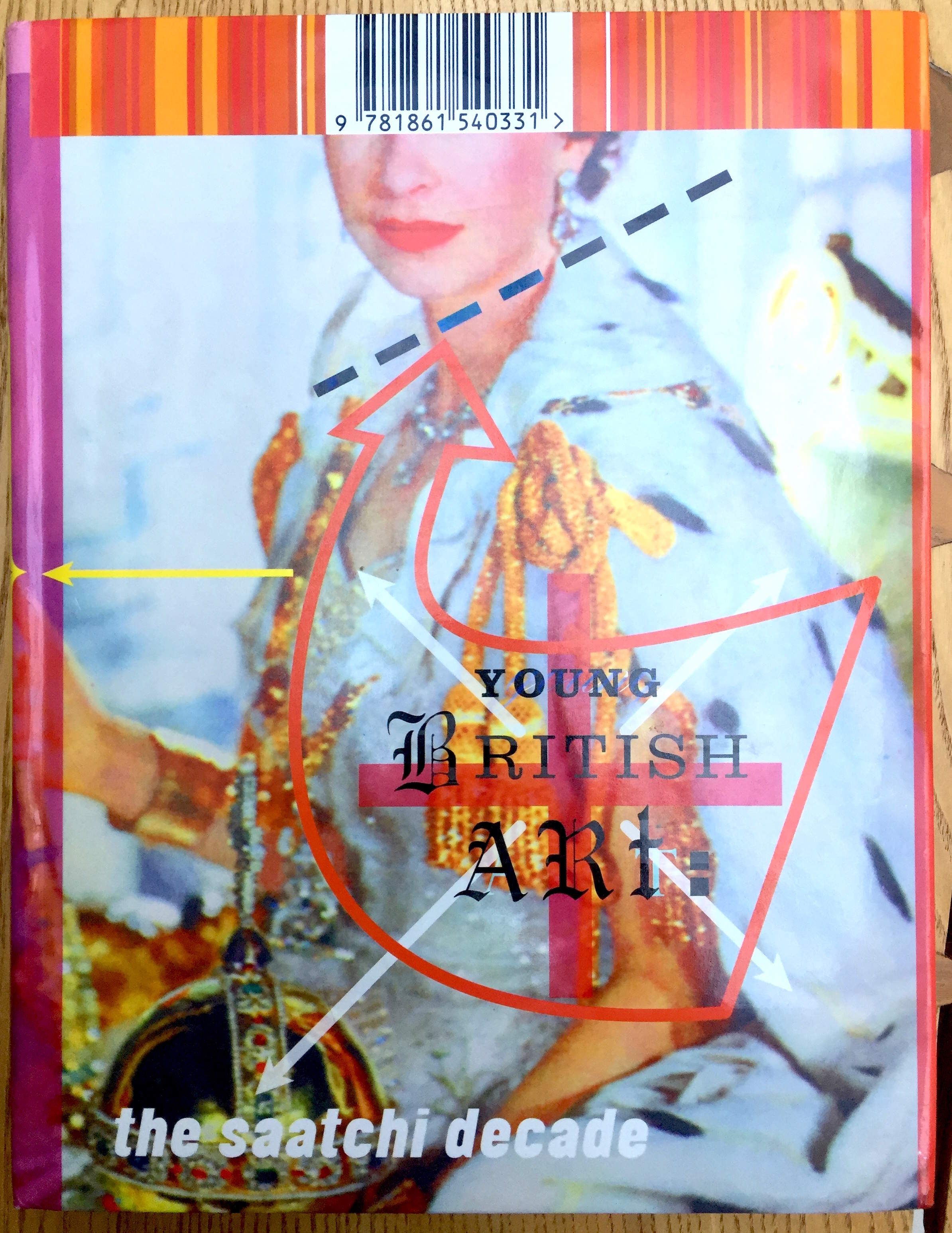 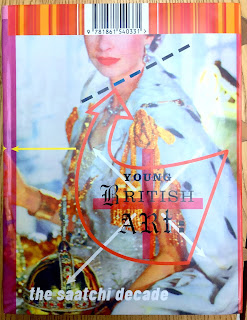 Autumn 1997, not quite the end of the 20th Century and 'Sensation' arrives at the Royal Academy, becoming the result of a cross-section of British art. This era of art is often thought of as, 'The Saatchi Decade,' courtesy of Charles Saatchi, the advertising mogul who is their greatest single patron and supporter. It has been almost a decade since 'Freeze', the exhibition organised by Damian Hirst and 15 of his class mates from Goldsmiths collage shown in the summer of 1988. These two exhibitions have become the markers from the beginning to the hype and phenomena that became Brit-Art, riding the wave of cool Britannia. 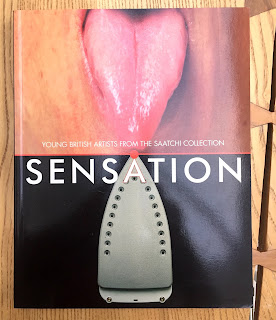 Sensation: YBAs from the Saatchi collection

The artist's are all unique individuals whose aims were to primarily  shock by celebrating the strange, the mysterious and freakish, while creating the abnormality of the normal and the normality of the abnormal. As these works bid to evoke both reality and sensation they also became images documenting many contravercial issues that were of concern at that time. The most shocking being Damien Hirst's dissected shark in formaldehyde, the Chapman brother's deformed, conjoined sex objectified figures and Marcus Harvey's 'Myra,' whose giant portrait was created out child's handprints which became defaced with egg during the show. While we could easily ask how this can be art the reality is a different story.  London is well and truly back in the global at the forefront brought back into the arena. 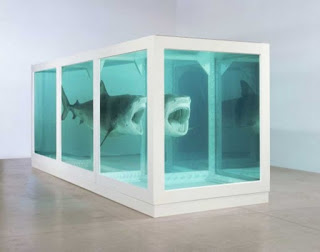 The Physical Impossibility of Death in the Mind of Someone Living: Damien Hirst 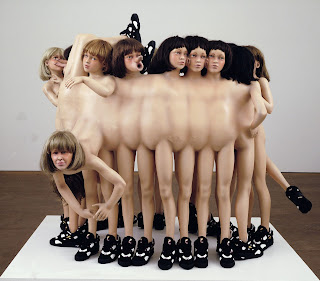 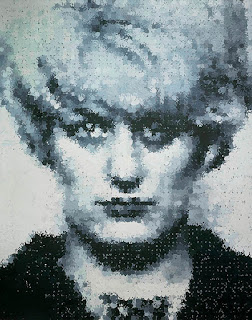 Now in Autumn 2000 the follow up to 'Sensation', has arrived:

Entering into the exhibition you crouch into a very small entrance that looks more like a gap that allows access into a building. This is an instillation by Gregor Shielder, a rebuilt room and an imaginary space for living within a house, yet separate from it. He builds rooms within rooms that are separated by narrow spaces, containers that hold the history of an individuals existence.

It's very dark and there seem to be quite a few people about, causing a state of confusion. People don't really know where we are or where we are supposed to go. I feel a desperate need to get out, experiencing an intense feeling of claustrophobia, a slight breathlessness and momentary panic. I'm unsure of the likely escape route becoming trapped inside this labyrinth. Afterwards you can see where you have been, which is little more than a box construction that seems so small and unthreatening within the large walls of the Royal Academy gallery room. Instead of imagining the type of people who may have lived in a room similar to this reconstruction, for some reason I think of Anne Frank. I wonder if her hiding place was anything like this, something about this instillation triggers thoughts of the Holocaust and of the genocides that occurred during World War II. 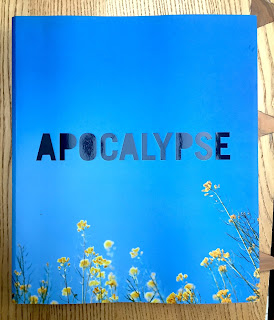 The Exhibition's name "Apocalypse,' implies facing history and the present, bringing with it a sense of finality, with a horror that is recalled from deep within our memories. We as individuals can face these realities, or take refuge in superficial beauty. The work of these artists can therefore be sentiments that illustrate many perspectives within parallel worlds, within life, or within theatre of fantasy.

I tend to be drawn to 'beauty,' although it is always the 'horror,' that will remain engraved in your brain. In this case the most horrific has to be a sequence of miniature sculptures of 'Fucking Hell', by Jake and Dinos Chapman, which reveal the atrocities of war, life in the trenches and on the front line. All blood and gore, illustrating the images of injury and pain too often hidden from the public after a victory. 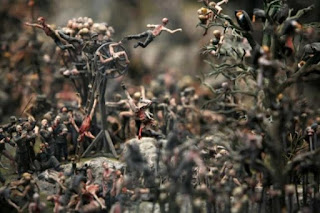 In total contrast are the works of Mariko Mori, who creates a futuristic, 'Dream Temple'. At 5 metres high and 10 metres wide it is made of glass. There are also aspects of circular dichronic glass, that create a glowing spectrum of coloured light due to it's iridescent surface, enhancing the dream. Inside the central sphere with the temple is a virtual reality video projecting abstract images of astral bodies that float in and out of existence. We are taken into Mariko Mori's dream, into a future where time is frozen, where you imagine that you have entered into a time capsule that takes you into the illusion of  a contemporary Nirvana. You experience a contrast of emotion, initially you are captured and attracted by the transparent beauty that becomes seductive and hypnotic, a place that looks like it can take you on a trip to enlightenment. And then on the other side of your mind there is uncertainty and apprehension, a fear of a future where science has gone a step to far, or aliens could have abducted you. 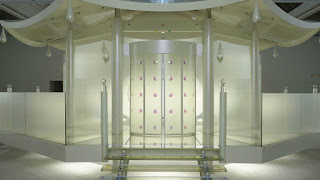 An interesting sculpture I likes is Tim Noble and Sue Webster's 'The Undesirables'. A shadow play rising above a stack of rubbish, which in the light across the wall, becomes the shadow of a couple watching the sun go down. Inspired by a trip to Glastonbury music festival the work becomes a comment on the state of society. At the base a pile of excess rubbish that contributes to environmental catastrophes such as pollution and global warming, although somewhere there is hope and beauty within nature and love. 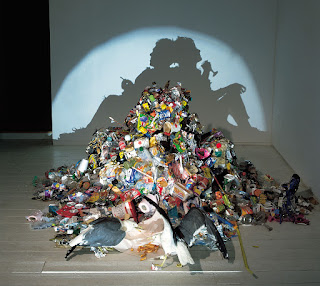 Perhaps one of the most shocking is Maurizio Catalan's, 'La Nora Ora / The Ninth Hour' a fully life-sized waxwork of Pope John Paul II who has been hit to the floor by a meteorite that has smashed through a glass roof above, as he continues to clutch on to his crucifix, in hope , clinging onto dear life. A whole large room is dedicated to this piece and when you walk in you are set gasp because the sculpture looks terrifyingly real, you can easily imagine such an unfortunate event. It's shocking but also ironic as the Pope holds on to his cross to the very end. 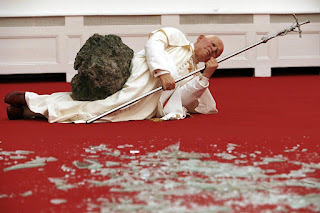 Photo credits : The Royal Academy and The Saatchi Gallery